What age is co-sleeping safe?

As soon as baby is born, most parents invite their newborn into their bedroom to sleep nearby for a form of cosleeping. Experts agree that this is the safest method for caring for your newborn.

That’s because your baby still isn’t quite oriented to the differences between day and night—a truth that wreaks havoc on their (and your) sleep schedule.

Until your baby develops their circadian rhythm—the 24-hour clock within all of us that regulates our patterns of sleepiness and alertness—baby will have a hard time sleeping for more than a few hours at a time.

Partner their undeveloped circadian rhythm with a tiny stomach that has them calling for food every few hours and you’ve got a perfect recipe for a rocky night of sleep—for both you and baby. With baby in your bedroom, you’ll be able to catch some much-needed extra shut-eye while quickly responding to baby’s every nursing need. You’ll also be close enough to respond to any concerns that arise as baby gets used to the world and used to the rise and setting of the sun.

Bedside co-sleepers like the babybay are designed to offer you and baby a safe co-sleeping solution to maximize rest time, emotional bonding, and healthy development during these important first months of baby’s life.

babybays are specially engineered to properly support, care, and nurture your baby up until they are around 5 months of age. They offer a firm, stable surface away from the plush and not-baby-friendly softness of your own mattress and blankets—while keeping baby within arm’s reach all through the night.

What happens after 5 or 6 months?

Similar models of babybay that are popular in Europe (used and loved by some pretty cool people like Mila Kunis, Ashton Kutcher, and German pro soccer player Sebastian Jung) are endorsed for and regularly enjoyed by parents and baby up through one year of age.

Though the US only tests co-sleepers up through 5 months, most experts agree that you should be sharing your room with baby through at least the 6-month mark. Depending on baby’s growing level of independence and your needs as parents, you can start thinking about moving baby out of your bedroom after this point. 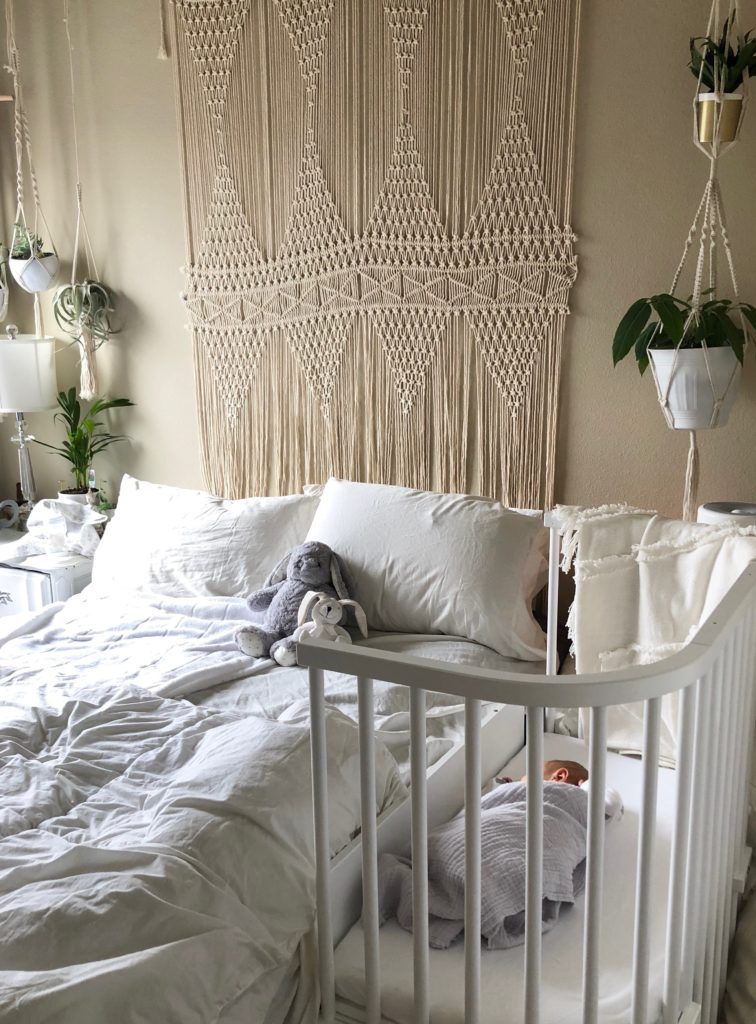 However, co-sleeping and room-sharing has been the natural and normal way for parents to bond with baby and get a better night’s sleep for centuries. (In fact, a study from anthropologist John Whiting found that almost 70% of the world’s children sleep and grow surrounded by loved ones!)

For parents who want to continue to reap the emotional-bonding and healthy-growth benefits of co-sleeping past that 6-month mark, converting your safe co-sleeper into a bedside bassinet or keeping a crib in your bedroom may be the ideal method for continuing to support baby.

What happens after 9 months?

By now, your baby is becoming increasingly independent. No longer content to simply lay on their back all through the night, they’ll feel the urge to move and crawl around during any break from sleep.

As your baby continues to explore their own mobility, your co-sleeping environment needs to be adapted to support their needs. Though by now baby is full of the adventurous spirit and can-do attitude they need to turn your mattress into a fun-filled playground, it’s better to save that kind of exploring for when you’re awake and watching.

Truth is: baby might still be too young to be fully supported by the softness of your comfy-as-can-be mattress, blankets, and pillows. The wrong roll, twist, or turn during the night can leave baby struck with no clue how to get themselves out. 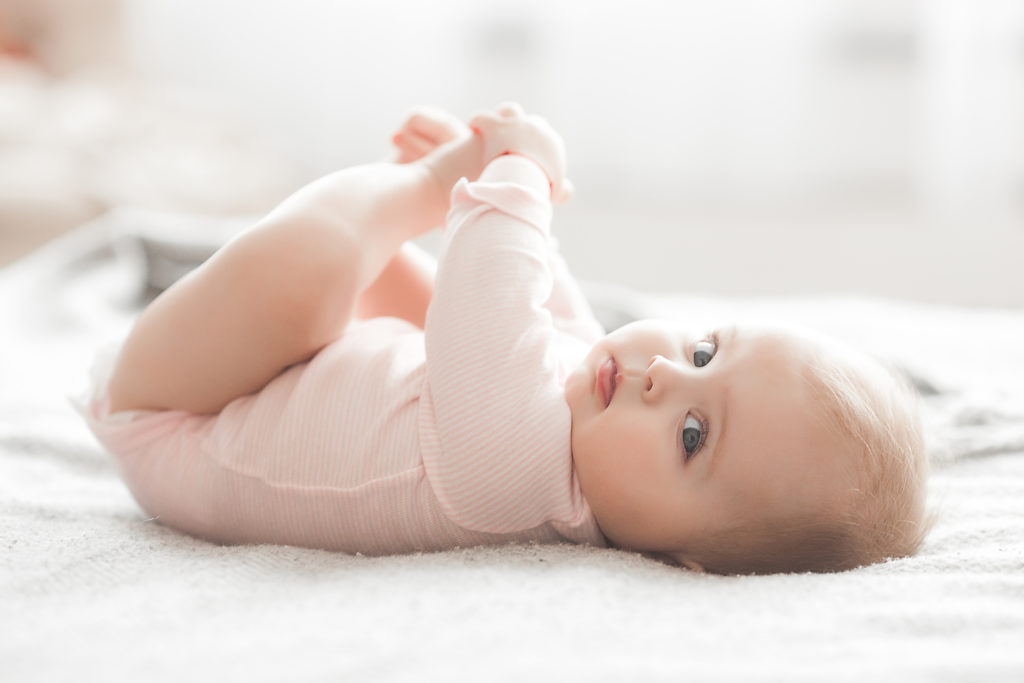 To keep baby safe, make sure that you move them to a space of their own by converting your safe co-sleeper into a bedside bassinet or standalone crib as soon as baby starts being filled with that must-move, must-dance, must-explore spirit.

What happens after 12 months?

Between one to two years of age, your child will grow from a tiny bundle of joy into a free-moving and free-exploring adventurer who doesn’t just know how to get themselves into some fun-filled situations…but how to get out of them safely as well.

Around this time, your child should be able to naturally be able to move out of, rollover, and free themselves from any kind of restraining blanket, pillow, or comfy comforter that comes their way.

Of course, every child is unique.

As your child continues to grow, they’ll become increasingly talented at getting themselves unwrapped and unwound during the night—allowing you to sleep easy with your child by your side. The same feeling of ease that you enjoyed while using the babybay co-sleeper for safe cosleeping in the first months of baby’s life can be joyously felt and luxuriated in once again. Though the babybay co sleeper bassinet safely supports your baby through their first several months of life, you’ll have to use your own judgement when deciding when your baby is ready to leave their co-sleeper and crib to bed share with you.

That’s why it’s important to carefully determine where your child is in their development when deciding what age is co sleeping safe with a toddler in your own bed.

But when that day comes…get ready for a long and restful night of cuddles, the kind of love-filled cuddles only your child can give. Co-sleeping is often used as a catch-all term to describe the experience of sleeping with your baby close by.

Co-sleeping may look a little different for every family. Parents may lay their child in a safe bedside sleeper that attaches to the side of their own bed, or they might share a bedroom with their child but encourage baby to sleep in a separate crib. They might even sleep with their baby nestled up against them all through the night. 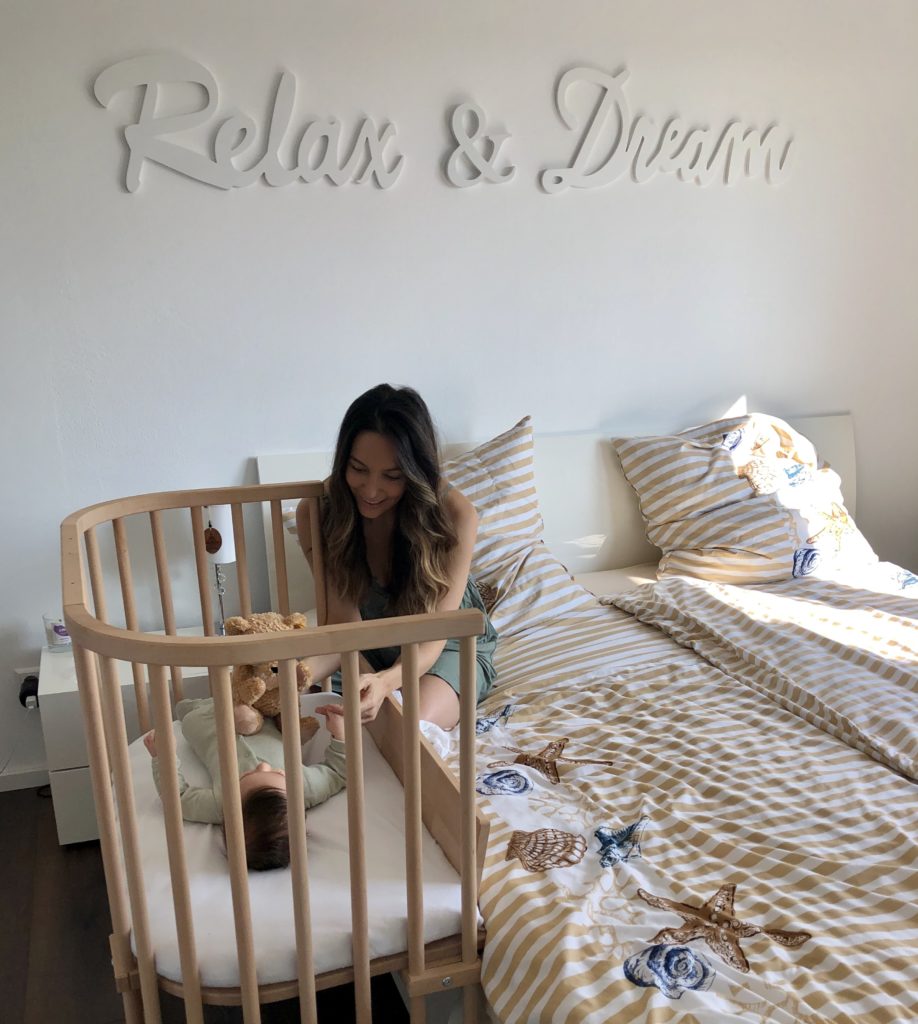 Though there are many ways to cosleep, some are far safer than others. (Bedside sleepers, we’re looking at you and giving you a gold star!)

But all forms of co-sleeping have one thing in common: they’ve been the safe sleeping practice preferred by families throughout history.

Though parents in many modern Western countries have popularized separate bedrooms and detached cribs, for thousands of years going to sleep curled up near your newborn has been the norm.

In fact, parents from many different cultures have long understood that cosleeping promotes healthy emotional and physical development while bonding you and your baby, easing the stress of nighttime nursing, and gifting everyone in the house a more restful night of rest.

(A full night of rest—now that’s something at the top of every new parent’s wish list!)

But as soon as mattresses and cribs became the new in-trend home fashion statement of the 19th century, parents in the Western world increasingly kicked children out of their own beds and moved them into mattresses and rooms of their own.

In America, Canada, and Europe, some parents continue to boot children out of their own bedroom and encourage them to sleep through the night alone.

However, anthropologist John Whiting surveyed 186 cultures and found that solitary sleeping might be a Western trend, but it’s far from a universal norm. He discovered that almost 70% of children living and growing around the world sleep in the company of others.

That proves that co-sleeping isn’t just a trend—it’s the most popular and longest-loved sleeping practice in history.

What are common cosleeping benefits?

To grow healthily in body and mind, your baby needs to be able to receive—and respond to—a ton of sensory feedback. When babies are shut alone in their room at night, they lose the opportunity to grow their sensory awareness during their sleeping hours.

But when babies are able to sleep close to others, they learn to bond and build meaningful connections while learning, growing, and developing an ability to separate and identify different sensory input.

This helps them breathe more regularly, while experiencing less stress overall by learning what it feels like to be safe, secure, and protected. (And that’s good news—because when babies are less stressed, they put more energy into healthy growth and reap the rewards of a healthier immune system!)

But your baby isn’t the only one who benefits from co-sleeping. Parents are able to care for their own bodies and minds by making nighttime nursing easier and getting a few much-needed extra hours of shut-eye.

What is the difference between co-sleeping and bedsharing?

Many parents who start to explore co-sleeping will find another term pop up in their suggested searches: bed sharing.

Bed-sharing is just as it sounds—it’s the practice of inviting your newborn not just into your bedroom, but onto your mattress as well.

Though bed sharing may boast some of the same benefits as other forms of co-sleeping—including increased bonding between parents and child and a less stressful night’s sleep for all—it can also be far less safe.

The feather-topped, super-soft, oh-so-pillowy mattresses that most of the Western world prefers can’t properly support your baby throughout the night. Your baby needs firmness and stability under their body while they sleep to ensure their body’s healthy growth.

Though baby will love having you nearby as they rest, they won’t love your sleeping surface.

Nor will they love all the extra blankets, pillows, and other comfort materials that adults love to cocoon in.

As comfy as it might be for adults to tuck into a long night surrounded by a cloud of goose down, those comfort items can easily get wrapped around your baby throughout the night and lead to unsafe situations.

That’s why parents should choose safe sleep for babies when setting up their environment.

By choosing a bedside sleeper that fits flush against their bed, parents can control the specifics of their baby’s environment.

(The first step? Pick a bedside co sleeper that’s right for baby and right for your room!)

Baby can sleep securely nestled within an arm’s reach of their parents, but feel comforted and protected on a mattress that is firm enough to support them and ensure safe sleeping. They can receive, learn, and grow from all the sensory input they receive throughout the night—while their parents sleep soundly knowing that they are safe in a bedside sleeper built just for them.

Ready to save your sleep?
Shop BabyBay Now